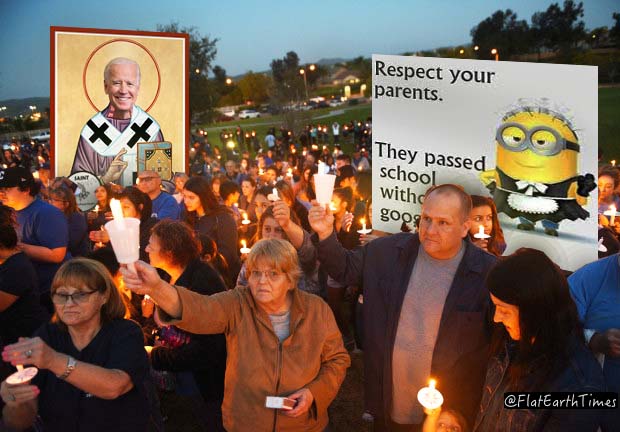 SCRANTON – Democratic voters roughly ranging in age from 56 to 73 gathered outside Lackawanna Courthouse Thursday night for a vigil in honor of former Vice President Joe Biden’s personal reputation and integrity.

“DAMN PROGRESSIVE MILLENNIALS!” ranted Harry Gitmore, 67, a belt sander.  “Whado they care about that stupid Green New Deal and pound-sign-Me-Too stuff for?!  We’re all gonna be gone before any of it matters!”

The potential 2020 presidential candidate is facing growing anger for his up-close and personal contact with women throughout his career.

“I know he’s creepy, but he’s the only Democrat running, according to Fox 5 with MaryAnne Donnelly!” said said Linda Smith, 59, a local housewife.  “The other day, Karen posted this WONDERFUL photo with those cute Minions, and words on it, about why we need to come together to fight DRUMPF (LOL!) with bipartisan candidates like Joe!”

“Thaaaaanks Linda! Oh, I love that MaryAnne Donnelly, but I hate her voice and her hair,” responded Karen, 61. “Kids look great!”

Participants in the vigil expressed the hope that their thoughts and prayers would preserve Mr. Biden’s integrity, under assault from ‘snowflake’ millennials.

“These stupid kids took participation trophies that we handed to them!” exclaimed Mr. Gitmore. “Back in my day, a participation trophy was nothing more than a GOOD PAYIN’ JOB! And we had to go to college and support a family with just that one JOB!  And also -” Mr. Gitmore’s further points and attempts to connect them to Joe Biden were overwhelmed by applause at the word ‘job.’

The Baby Boomers suggested Mr. Biden was their only chance to beat President Trump in the upcoming 2020 race.

“We have to forgive him, because he was Obama’s ‘bro!’ (LOL!)” said Mrs. Smith, after making a reporter wait in silence for three-and-a-half minutes while she shared a Facebook post from a local radio station. “Karen posted photos of him on Facebook saying nice, funny things to President Obama. I can’t even believe they were true!”

“WAHT R WE GONAN DO WIHTOUT JOLTIN’ JOE?” asked Mr. Gitmore, somehow misspelling that quote and speaking in caps lock. “TAKEN THE G OFF THE END OF VERBS!  WHO CARES IF HE TOUHCED SHULDERS N’ SMELED HAIR ? !  AT LEAST HE’S GETTIN’ STFUF DONE!”

At this point the vigil quickly dispersed, with participants muttering about catching “Hip, progressive remakes of old hits” for regularly scheduled programming on network television.

Dreamworks Pictures contributed to this report. They can be reached at [email protected]