Kyrie Irving has had an incredible start to the NBA season. Since losing teammate Gordon Hayward to a season-ending injury, Kyrie’s Boston Celtics rocketed to the top of the standings with a 16-game winning streak, focusing on teamwork and fourth quarter stamina, often fighting back from double-digit deficits.

The edge of defeat is no match for Kyrie, for there is only one edge he fears, and it is that of our planet. Kyrie’s all-star performance to tip off the NBA season prove his fears to be valid, and the Earth to be flat.

Take a look at this (real) statement by Kyrie from a podcast last month with UCONN Coach Geno Auriemma:

Let’s break down Kyrie’s drive and grit here.  Consider that the Earth is huge, and it’s really difficult to get a camera far enough away (using powerful rockets at astronomical cost) to actually capture the whole planet in a single shot. Take for a moment the ability of high-altitude photos to demonstrate the steady curvature of the planet. Add in that there definitely are pictures of Earth, anyway. Like a bunch.

And ask yourself, QUESTION: How can you look at all that evidence, and still fight on in the battle for the truth?

ANSWER: With the same GRIT, DETERMINATION, and FIGHT to WIN against the odds that brought a team missing its star small forward to a sixteen-game winning streak with eight comebacks over the NBA’s leading teams.

Some would consider being down double-digits in the fourth quarter evidence of impending defeat. Well Kyrie Irving doesn’t care about evidence. That’s a #FlatEarthFact.

Then there are weanie-science nerds like Bill Nye who suggest that it’s irresponsible to talk up debunked theories from a platform such as Kyrie’s and that societies figured out the Earth was spherical over two millennia ago.  Well Mr. Science Guy, they say history is written by the winners.  How many NBA games have you won?

Kyrie Irving plays for the Celtics, a team named for the Celts, an ancient society of winners.  They came from northwestern Europe and ALSO understood the Earth to be flat. That’s why they built Stonehenge. It’s a discus. #FlatEarthFact.

Kyrie‘s skills clearly demonstrate his understanding that gravity is not a function of mass; it is merely that force he battles daily, the force that threatens to drag us off our home should we take the wrong step, and the blessing that keeps his opponents’ hands fractions of an inch below his perfect shots.

With every jumpshot he drops into that flat, rounded rim, Kyrie Irving sinks that spherical-Earth theory into the oceans of our flat-discus home, lifting the Celtics to ever-increasing glory and the Flat-Earth movement to ever-startling heights.

And he wins, proving that in this slice of the pie we call America, the Flat Earth Times is the truth.

Because in America, winning is the only truth that matters. #FlatEarthFact 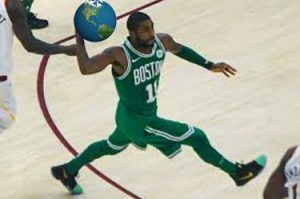 A Boston Celtics Fan contributed to this editorial.  He can be reached at theflatearthtimes@gmail.com