WASHINGTON – President Trump, eager to sign a massive tax cut into law as the first major legislative achievement of his tenure, this morning took the unusual step of having a bowel movement on the South Lawn of the White House.

During a live phone interview with CNN’s Blitz Wolfman, President Trump was asked about the numerous analyses that suggest the bill, polling poorly with the American public, benefits the rich at the expense of students.

“Didn’t you see what Lavar Ball said yesterday?” responded Trump. “Terrible! No gratitude in these guys.” Wolfman asked once more about the bill, at which point Trump hung up. He was seen moments later sprinting haphazardly onto the South Lawn, dropping his pants, and initiating a robust bowel movement in front of hundreds of bewildered reporters and tourists. 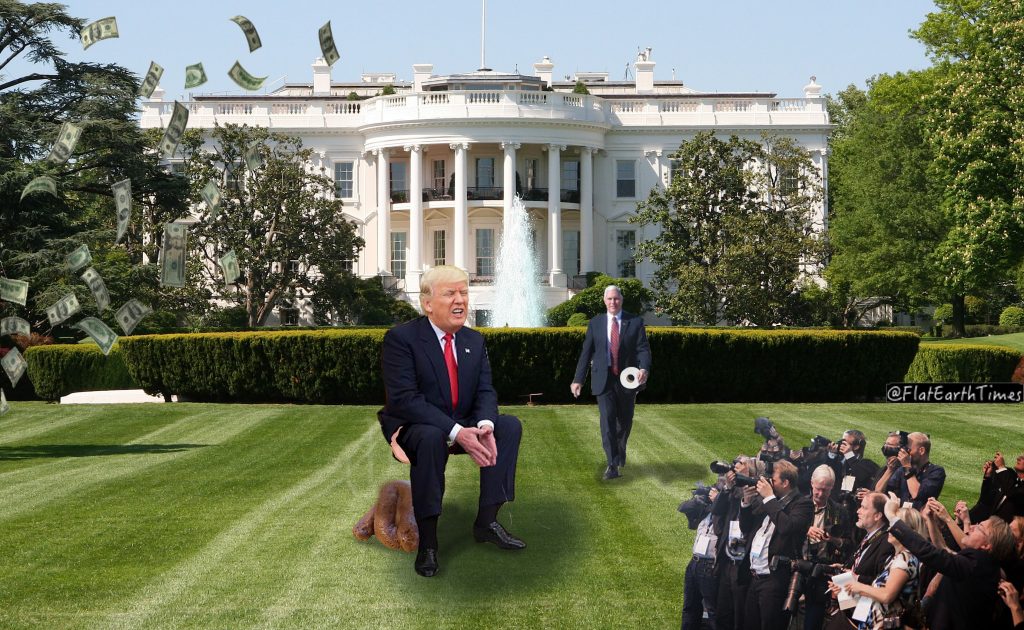 “The Fake News Media has nothing but lies to report on our big, oohh, beautiful, yeah…. tax plan!” he was heard saying, shifting and squatting as he desecrated the freshly cut green grass, gesturing to Vice President Mike Pence behind him for toilet paper. “Muslims killed Jesus” he added, noticing the reporters.

Some Conservative pundits came to the president’s defense.

“Trump is showing that we’re not going to deal with any more of the crap of the Obama Administration,” said Sean Hannity on his Fox News program that day.

The tax plan Senate Republicans are working to pass has left millions unsure of what they may receive in their paychecks next year, with many in the middle class expecting tax hikes.  Some were on hand to witness the President’s bowel movement.

“I can’t believe he’s pooping on the lawn!” said Theresa Morgan, a bus driver on vacation from Denver in response to a question about the roughly $1,400 she expects to pay in additional taxes and medical insurance premiums under the Senate bill. “Oh, and did you hear about Matt Lauer?”

When asked as he walked back to the White House why the Senate Tax Bill was including cuts to student loan interest deductions that graduate students depend on, President Trump turned back and promptly suggested his feces looked like several prominent black athletes.

A passing butterfly contributed to this report. It can be reached at [email protected]